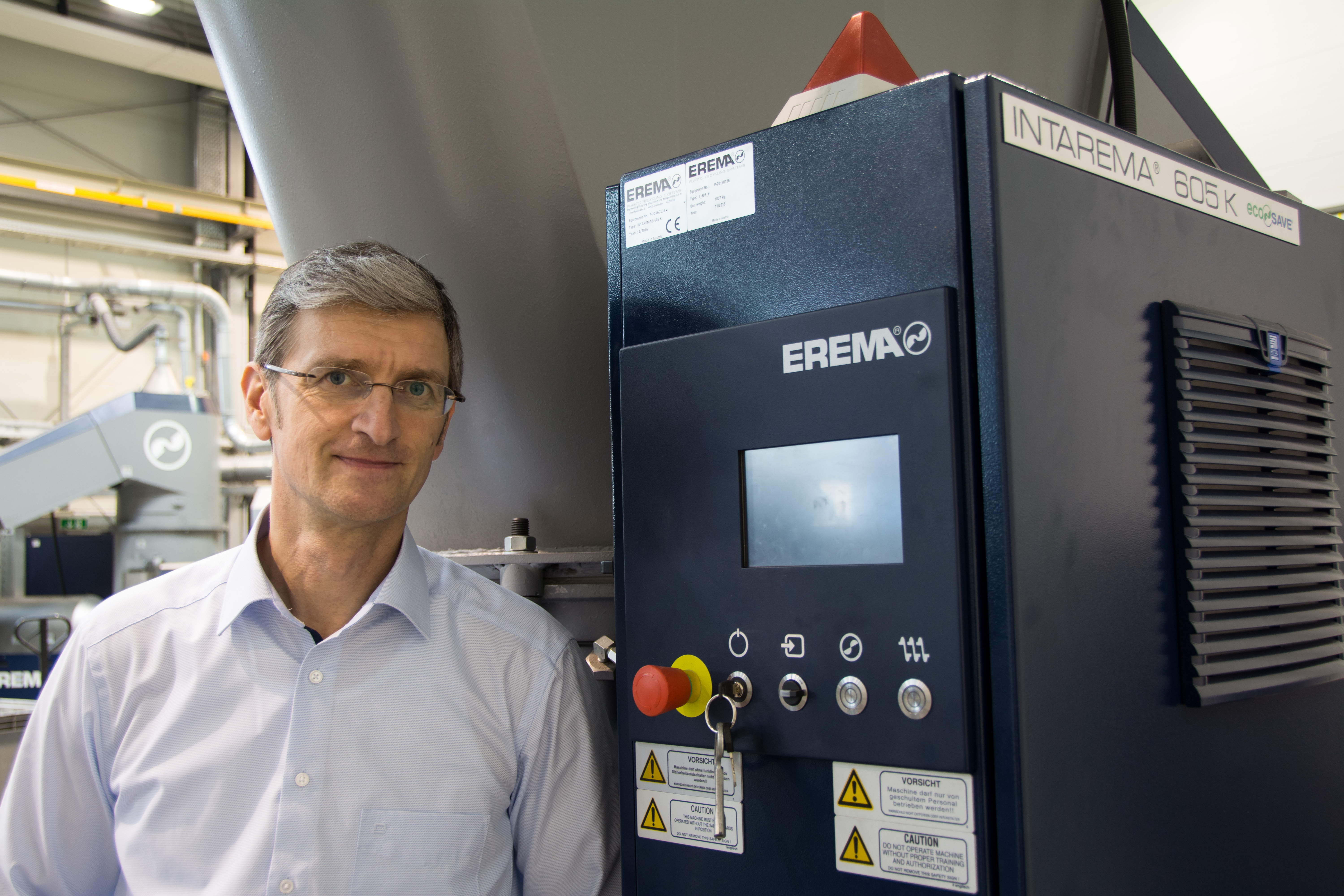 EREMA offers a fully automatic processing system for edge trim with the proven INTAREMA® K. Sales have increased by 100 per cent compared to the previous financial year. More and more producers are reducing their material costs by recycling clean production waste.

Ansfelden, 21 March 2018 – An increase in sales of the INTAREMA® K recycling system built by the mechanical engineers EREMA is already clear before the end of the 2017/18 financial year at the end of March. By the end of March 2018 a total of over 40 of these processing systems will have been shipped within twelve months – twice as many compared to the previous financial year. According to Andreas Dirnberger, the fact that customers are concentrating more on the recycling of clean edge trim can be explained largely by the increasing demand for high-quality film products and the associated expansion of production capacities. The Business Development Manager at the EREMA Group says that the INTAREMA® K's road to success comes from its profitability: "The material alone accounts for around 80 per cent of the manufacturing costs of flexible packaging. If you consider the usual edge trim figure of around 10 per cent in blown film manufacturing, recycling is a must-have in terms of cost efficiency." The edge trim which accumulates in production can be transferred directly from the blown film plant – without pre-shredding – to make high-quality recyclates. And 100 per cent of these recyclates can then be put back into the production process. "Thanks to the INTAREMA® K the film manufacturer reduces both material and production costs considerably as a result," says Dirnberger, summing up. This is also substantiated by Manfred Goellner, Head of Process Engineering at Hosokawa Alpine, one of the largest producers of blown film plants in the world: "We expect a recycling system to work with absolute reliability and fully automatically. This is why we have a machine built by EREMA in use in our inhouse technical centre and also recommend that our customers count on the INTAREMA® K."

Perfect payback period
The INTAREMA® K is available to OEM customers such as Hosokawa Alpine as part of standardised system packages but there is also high demand for it among end customers. The Austrian company Coveris Flexibles Austria has been regarded as a specialist in film production for over 50 years. The company runs blow and cast extrusion lines, printing and finishing machines and 20 recycling systems from EREMA in Kufstein, Austria. "We have been using fully automatic edge trim processing systems from EREMA for many years," says Ferdinand Mikesch, Head of Process, Engineering & Technology at Coveris: "Not least because the payback period for the compact systems is very short."

INTAREMA® K – fully automatic and flexible
The INTAREMA® K is ideal for the processing of a wide variety of clean plastic waste. PE mono or multilayer films, PE films with PP, PA, EVOH or EVA or also breathable films such as PE with calcium carbonate can be processed. A low mass temperature ensures very gentle processing of the polymer. Thanks to the interplay with integrated control the INTAREMA® K's preconditioning unit enables automatic adjustment to varying input quantities. In the event of brief material shortages the system switches to standby in the interest of maximum energy efficiency.