EREMA GesmbH, headquartered in Ansfelden, Austria, has achieved a record turnover figure of EUR 115 million for the 2014/15 fiscal year. This corresponds to a 21 per cent and EUR 20 million plus in turnover compared to the previous year. The turnover of the EREMA Group as a whole with 480 employees in total (EREMA GesmbH, PURE LOOP GesmbH and 3S GesmbH) rose to EUR 130 million.

This result shows that the Austrian manufacturer of recycling systems is continuing the positive course of previous years. EREMA GesmbH, regarded as the global market and innovation leader, was able to generate a turnover of EUR 115 million at its location in Ansfelden alone from April 2014 to March 2015. "This growth is due primarily to the new INTAREMA® plant generation and confirms that this innovation represents an attractive technology for customers," explains EREMA CEO Manfred Hackl.

Together with 3S GesmbH in Roitham near Gmunden and the subsidiary EREMA North America Inc. in Ipswich, MA, EREMA has been pursuing a consistent and sustainable growth strategy for a number of years. This also has an impact on group turnover, with consolidated sales at around EUR 130 million in the last financial year.

This success is supported above all by the new INTAREMA® plant generation with 245 recycling systems sold already at the location in Ansfelden since the system was launched 18 months ago. Thanks to Counter Current technology, INTAREMA® is exceptionally flexible and productive," explains Hackl, "the system adapts in an optimum way to the broad spectrum of recycling applications which means that demand is constantly high.

EREMA announced its continuing expansion at the beginning of the year with the foundation of the new sister company PURE LOOP GesmbH. In terms of strategy, PURE LOOP as the sister company of EREMA pursues the clear positioning in the market and further development of the shredder-extruder technology while EREMA as a group intensifies its range of services in the field of in-house recycling.

The next expansion is now following: EREMA North America, Inc., a subsidiary of EREMA GesmbH, is more than doubling the size of its trial centre due to high demand – especially in the post consumer recycling sector. The trial centre at the company's head office in Ipswich, Massachusetts, will be extended to 2,400 m² in total featuring four recycling systems for test runs. The expansion is scheduled for completion in late summer 2015.

Sister company 3S has also expanded in the 2014/15 financial year. The new premises in Wartberg im Mürztal in Styria have been extended by 4,000 m² to a total of 7,000 m² production space and the number of employees has risen from 60 to 68 compared to the previous financial year. 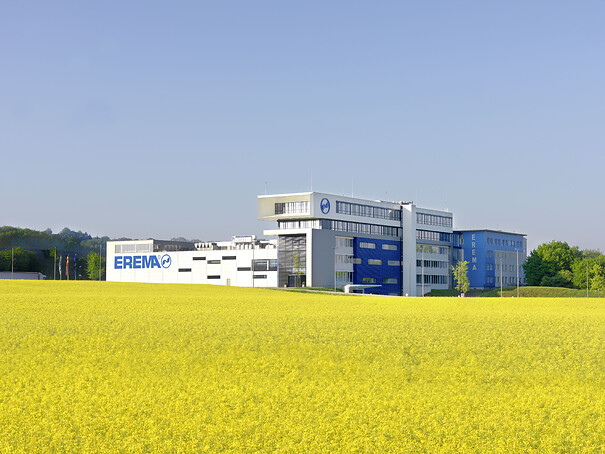 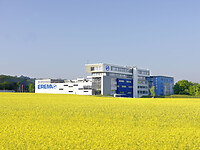 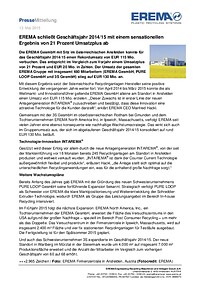 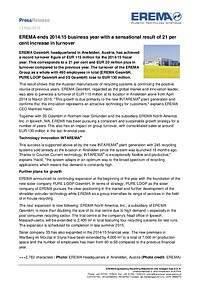