From reserve site to production plant in just a few months

Just under a year ago, the EREMA Group started to repurpose the premises of Gruber & Kaja in St. Marien, which they took over as a reserve site in January 2021. In the meantime, a lot is going on there.

St. Marien, January 26, 2022 - "When this site came up for sale, it only took us a few days to decide to buy the 40,000m² plot, including the workshop hall, which has an area of 15,000m²," says Manfred Hackl, CEO of EREMA Group GmbH. Around EUR 20 million was invested in the purchase, as the site offered the opportunity to increase production capacity by 60 percent in the immediate vicinity of the company headquarters in Ansfelden.

The fact that this site is now already being used so intensively was not envisaged at the time, because at the end of 2020 the company was just completing the expansion to their headquarters in Ansfelden, involving an investment of around EUR 17 million. 20 new jobs have already been created as a result, with a further 30 to follow in the next few months. By the time the new site is completed, the total number of new jobs will be up to 150.

This development is due to the high demand for the EREMA Group's plastics recycling technologies and the trend towards ever-larger recycling plants. "Just in December, we delivered a VACUREMA® system to Brazil that will produce up to 40,000 metric tonnes of recycled PET (rPET) per year. That is equivalent to recycling around 1.1 billion 1.5-litre PET bottles. This site provides the perfect conditions for building this scale of machine," says Hackl.

Markus Achleitner, Upper Austria's Minister for the Economy, was also impressed by this development during his visit to St. Marien. "There is hardly any other region in the world that focuses as closely on materials expertise and the circular economy as in Upper Austria. We want to fully exploit this potential with our #upperVISION2030 business and research strategy. EREMA is an important driver in this industry. It makes me all the more pleased that the company owners have once again confirmed their commitment to Upper Austria as a business location, to the circular economy and to the employees by developing this site," says Achleitner. "This investment is an important positive signal for the entire region of Upper Austria location, especially in the current challenging times, and all the more so for creating 150 jobs," he emphasises.

New site milestones
Since January 2021, part of the existing office and hall space at Kunststoffstraße 1, as the site's address is now called, has been occupied by companies and departments of the EREMA Group. UMAC GmbH, a subsidiary specialising in servicing and trading previously owned recycling machines, which was severely short of space at its main location in Styria, moved its entire production and administration to St. Marien. Large areas of hall storage space were adapted for both UMAC and EREMA GmbH. The paint shop was also relocated from Ansfelden to St. Marien, and another hall was equipped for building large-scale VACUREMA® systems - these are systems used all over the world to recycle PET bottles. Production in this workshop is now being ramped up step by step.

Space that is not being used in St. Marien over the medium-term will be rented out. An industry-related firm has already moved in, and another 300 m² of office space is currently still available.

Just in December, we delivered a VACUREMA® system to Brazil that will produce up to 40,000 metric tonnes of recycled PET (rPET) per year. That is equivalent to recycling around 1.1 billion 1.5-litre PET bottles. 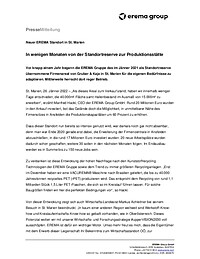