Ansfelden, Austria, 24 February 2014 - Around 779,000 tonnes of PET are collected in the USA every year and in the region of 514,000 tonnes remain in the country. Approximately 295,000 tonnes thereof are processed to make rPET for direct food contact. Half of the rPET is produced using VACUREMA® technology from EREMA, which corresponds to a market share of 50%. In Europe the market share in this segment has also already reached 30%. All in all there are more than 150 VACUREMA® systems in use around the world, producing high-quality repellets and end products such as films, with an overall annual capacity of around 1 million tonnes.

What is the secret behind VACUREMA®, which has become the world's most used technology for the recycling of post consumer PET bottle flakes, PET in-house waste and also PE-HD bottle flakes since it was launched in 1998?

The deciding factor is the highly efficient, food contact compliant decontamination BEFORE the extrusion process. The patented pre-treatment of PET flakes at raised temperature and in high vacuum before the extrusion process removes moisture and migration materials from the feedstock very effectively and in a stable process environment. Thanks to the vacuum treatment, stable IV values can be achieved even in the case of varying moisture levels and different IV values in the input material. As input materials with up to 1.5% moisture can be processed, no expensive pre-drying is necessary, unlike other processes available on the market. Extruder degassing is not required either, meaning that a short extruder screw can be used and the thermal stress on the material is reduced as a result. Furthermore, the unique, patented configuration means considerably less maintenance compared to other systems.

efsa approved and tested through automatic operation mode with FCC

The repellets/end products produced with VACUREMA® technology for direct food contact fulfil the purity requirements of major brand owners and, besides country-specific approvals, also has internationally recognised certification from the North American FDA and efsa, the European Food Safety Authority. "Some 347,000 tonnes of rPET for direct food contact are produced every year with VACUREMA® systems. And in doing so, our customers use up to 100% of the recycled pellets for the production of bottles and food contact grade thermoforming sheet in accordance with efsa guidelines," explains Christoph Wöss, VACUREMA® Product Manager.

Users can rely on a stable process at all times thanks to the automatic operating mode with FCC – Food Contact Control. The parameters for direct food contact compliance are monitored and archived continuously in the recycling process on all VACUREMA® systems. The Food Contact Control (FCC) feature supervises the stored recipe data which enables you to switch to the process parameters required for the production of the respective recyclate simply by pressing a button. If levels go beyond defined limits an alarm is triggered automatically and (optionally) material flow is diverted away from the production line. This guarantees traceability.

Confirmed by independent testing institute as most energy-efficient process

An independent testing institute has confirmed that VACUREMA® technology has the best energy efficiency ratings compared to others. A total of eight different PET recycling technologies available on the market were tested for electrical and thermal performance. The VACUREMA® Inline Sheet system (used to produce food contact grade thermoforming sheet) of a customer in Germany came out on top in an energy comparison with other systems available on the market, recording the lowest specific total energy consumption (including sheet downstream) of 0.29 kWh/kg (Fig. 2).

VACUREMA® technology proved to be 40% more energy efficient than other systems also in the bottle-to-bottle field with a rating of 0.295 kWh/kg. This is due on the one hand to the decontamination BEFORE extrusion which – unlike other systems on the market – requires only a single energy input for processing. Plus, on the other hand, no additional pre-drying is required as materials with input moisture of up to around 1.5% can be processed.

The very large active filter areas of the EREMA filter systems likewise contribute to the system's remarkable efficiency performance. The patented partial surface backflush screen changers from the RTF series feature a fully automatic self-cleaning system which, despite extremely fine filtration (32 µm screen mesh), allows low pressure losses, high filter capacity and long filter service life. The result is highly clean repellets. Users are also spared from having to buy expen-sive special filters which are often necessary with other manufacturers. EREMA's high-performance filters, which can be connected directly to the extruder outlet, have been so successful for large area ultrafine melt filtration in the production of flat film that other manufacturers of film plants now use the EREMA piston screen changer as standard. These are available in a variety of sizes and output levels, up to the six-piston system with twelve parallel filter screens.

Compact Inline Crystallisation (CIC) makes VACUREMA® the only system on the market which is able to produce strand pellets. As around 80% of virgin material is produced in strand form, mixtures of repellets made using VACUREMA® and virgin material are now easier and actually possible. 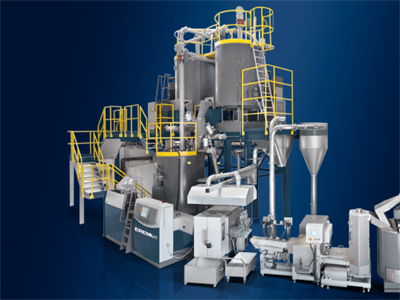 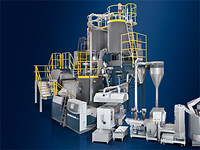 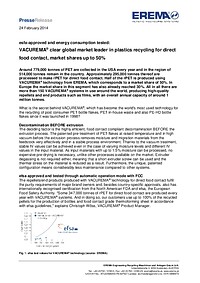